The very interesting part in Hydroponic Fodder technology is that ones you understand the technical concept of growing it, you can grow this green fodder on a very small piece of land in any part of world by just controlling those factors required to grow .
the total fodder grown on 2-3 acres (approx 1 hectare) of land by conventional method can be grown only in just 1500 sqft area of land by hydroponic fodder technology.

In todays date , demand of milk and meat is increasing drastically because of increasing population and to satisfy this need people should get in animal husbandary business,
in upcoming future if we compromise on this comodities there will be a huge shortage in market and ultimatly the demand will be increase and price will also be increase
Hence to balance the market there should be a proper balance between supply and demand of milk and meat.

This sitution is given a huge apportunity to new Entrepreneurs to get in this Business,
the demand of this comodity is never going to stop because of increasing population day by day.

BUT those Entrepreneurs are definitly going to face a big problem of growing green FODDER for there goats,cattles,sheeps,rabbits,turkeys,indigenous chikens,pigs,horses and many other animals which preliminary depends on green fodder .

HYDROPONIC FODDER TECHNOLOGY will solve the upcoming quetions of fodder which are going to arise in front of todays youth
In last 10-15 years back , it was not possible for any Farmers or Entrepreneurs to think about hydroponic fodder technology because at that time no proper and practical information was available .
But today,due to Globalization it is possible to share this technology,work on it and start this activity any where on this planet.

At last I will say to my people that they should get in this field, study this technology and get Started. 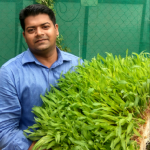